Rods sedimenting in a viscous suspension exhibit fascinating dynamics that are represented in the video shown on the left (click the video to play).  At relatively short times after starting from a random configuration (shown during the first rotation of the box in the video), the rods tend to align in the direction of gravity.  Since the sedimentation rate of a rod aligned with gravity exceeds that of a rod in any other orientation, the overall bulk sedimentation rate increases.  The rod alignment attains a steady distribution at the time of the second rotation of the box, yet the sedimentation rate continues to increase in time due to the demixing, or formation of clusters, of the particles. 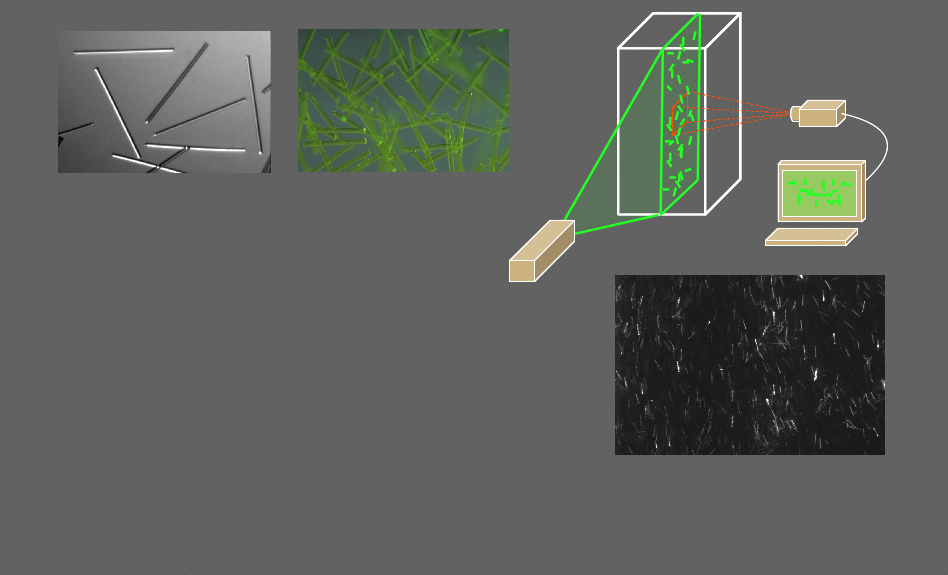 Experiments verify both that the suspension of rods demixes during sedimentation and that this instability results in an enhanced rate of sedimentation. The rods used in the experiments (see the two figures above) are placed in the sedimentation vessel containing a viscous, Newtonian fluid (as shown on the far right). Due to the difference in density with the fluid, the particles sediment.  Measurements are facilitated by imaging the rods, which are fluorescent and refractive-index matched with the fluid, within a laser sheet as shown.  An example result, on the right, shows regions of high and low density of particles.  Processing many such images provides information on the distribution of the rods, their rate of sedimentation, and more.

Bloen Metzger, Jason E. Butler, and Elisabeth Guazzelli, "Experimental investigation of the instability of a sedimenting suspension of fibers," Journal of Fluid Mechanics 575, 307-332, 2007.

Bloen Metzger, Jason E. Butler, and Elisabeth Guazzelli, "On wavelength selection in the instability of settling fibers," Physics of Fluids 19, 098105, 2007.